This electro locomotive is the mainstay of the Federal Swiss Railways (SBB CFF FSS)  - and some of the many privately owned railway lines as well. It was introduced to the Swiss rail networks in 1964 and with the last unit added to the roster in 1985 some 296 Re 4/4 II and III have worn the SBB livery. Further 10 units wore the colours of Mittel Thurgau Bahn and Regionalverkehr Mittelland.

When travelling in Switzerland you regularly come across the Re 4/4 in front of all sorts of consists. But you quickly notice that a Re 4/4 is more than just a Re 4/4.
Actually you can divide the class into three distinct groups;

Within the groups you will find little differences as well, as no less than seven series - including the prototypes - of Re 4/4 II are in service.

What we offer is a locomotive typical of group 2 and 3. The liveries and meshes will differ from road number to road number, so some packages will be prices differently depending on the degree of extra effort put into them. The exact price has not been settled as of now, we still wait for the brand owners to respond with regard to commercial licenses, but expect it to be a round average of what you see from the other shops. 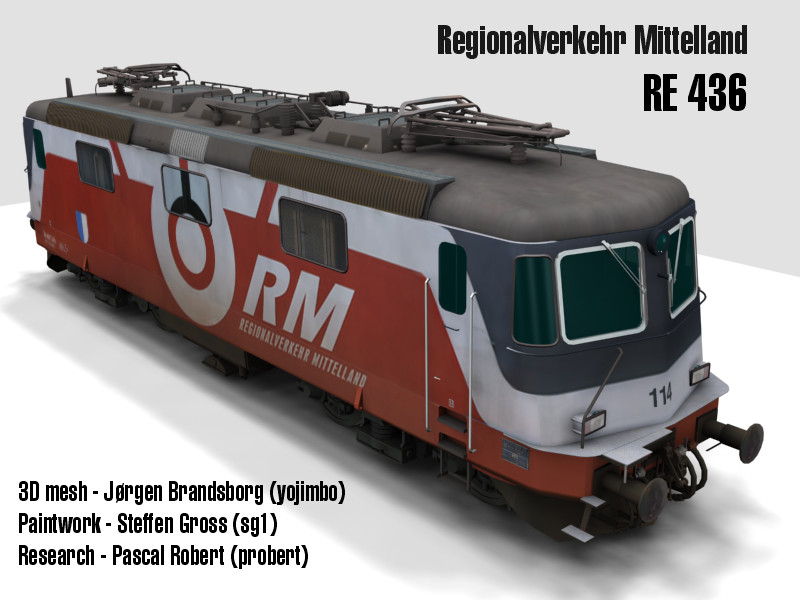 As you can see from the credits, this is not a one-man show. Special thanks are due to master painter Steffen Gross AKA sg1 for his excellent work with the skin(s) and to our never tiring "man in the field" Pascal Robert AKA probert for providing some rather unique reference material.
Also all the other folks out there who provided hints and advice deserve thanks - you all know who you are ;o)

All the RM Re 436 units nicely displayed on Steffen's little test layout. Yes, this is how they look in the game! We are aware that no. 114 and no. 115 are used as Werbeloks (Schweizer Stahl and M-Real respectively), but unfortunately we have not yet been able to get hold of good enough photos to do the liveries sufficient justice.

The first release was originally intended to have a cab typical for the Re 4/4 II/III 11101 - 11298 and 11353 - 11370. However circumstances have made this impossible. The cab will however be offered as an add-on and at a very low price. You can thus safely order a Re 4/4 II and use the standard TRS cab until I finish the real one. Owners of no-cab units will receive notice when the cab is available and be able to upgrade.
The cab will only become fully integrated when I upgrade the locomotive itself. This upgrade will be free for owners of the relevant locomotive and cab, but first time buyers will pay full price. If you prefer to wait for the upgrade and do not buy a cab separately, you will eligible for a discount.

This is what I refer to as the "standard cab". Obviously I will work on the other variants as well, but it seems the logical choice to do the most widespread version first.
From start the cab will have the basic functions; brakes, throttle, pantographs, etc. But I have been promised a little intro into scripting, so you can expect the numbers of features to grow accordingly.

Well now the diecision has been made. The RM Re 436 will be the first one to fill the shelves. Nevertheles you are still welcome to contact us and propose a new or alternative livery. So if you have a favourite locomotive you would like to see on your routes, you can attach a photo - or link to one - to the e-mail and we will look into it. Note that we cannot promise to make the relevant locomotive, but enough suggestions of one particular road number will definitely help.

back to payware main page